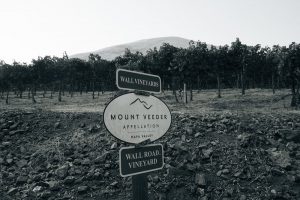 John Boich had invited me up to visit his winery Boich Family Cellar, which is the kind of place where you’re given very specific directions to ensure you don’t get lost en route. A good 15 minutes — give or take — up my least-favorite Napa road, Oakville Grade, I turned onto Wall Road. (If you start heading down towards Glen Ellen, you’ve gone too far, I was told).

As I drove down Wall, it was apparent that if positioned properly, I’d be rewarded with a grand view, but it wasn’t until I passed through the gate at Boich and walked in through the grand estate doors that it literally smacked me in the face: one of the most dramatic views I’ve seen in Napa Valley.

“This was just land. You had to get through the forest to get to the edge,” Boich said of the property when he first purchased it in 1997, following lunch at Tra Vigne. He “was a little buzzed” and “rolled into a realty office in St. Helena out of curiosity.”

Boich swears he wasn’t looking to purchase property and that as he was about to leave, the realtor told him about one more site that wasn’t yet listed. Her family just so happened to own the property and she took him up the grade to check out a 10-acre, heavily-forested parcel.

One look at the view and he said he “had to have it.”

But the property sat for about three years. The purchase was so spontaneous that he didn’t really have a plan of what he wanted to do with it. Boich was working 60 hours a week as a financial analyst and had a young family, so there wasn’t much time for a side project.

Today, he calls Boich Family Cellar a “20-year labor of love.” It took him eight years just to clear the land by removing dozens of trees and building the retaining wall on a steep slope in order to plant the first vine, working most Saturdays with a small crew from 2001-2009. “It was meant to be a retired hobby business for me. It turned into a little bit more than that,” he said.

Over time, he felt a major shift within himself — one he didn’t expect.

“What happened during that process was I became super attached to this land and being up here. I had a camper and a cold shower and I realized I’d rather just be dirty,” he recalled. “Going back to San Francisco in those days, it was like, ‘Ah, dammit.’ I knew I wanted to create a chapter in my life after work that would be here. Being up here was this whole new world to me that opened up a whole other piece of my consciousness.”

Eventually, Boich realized he wanted to make wine, and not just some small, hobby label that he shared with friends and family. He wanted to make premium juice from the best vineyards around that could compete with the cult labels of Napa Valley, even though it made little business sense on paper and he knew it.

“It was just passion. There was no practical or impractical part of it. The steaminess of being here and living here and making an amazing wine to boot—talk about a cool, sexy dream,” he said. “It’s where passion trumps practicality.”

Marching to a Different Beat 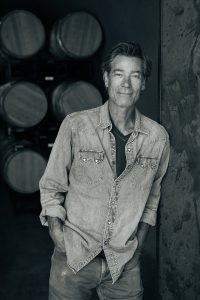 Boich certainly doesn’t present himself like a buttoned-up corporate man, or even your typical high-end Napa winery owner. Case in point: not many people I’ve interviewed in this business have candidly admitted that their dream was serendipitously ignited after a boozy lunch, though I doubt he’s the first.

In fact, it’s hard to imagine Boich in a suit and tie, working a traditional 9-5. He speaks excitedly and poetically about wine like an artist with an air of cool a la The Dude in The Big Lebowski. His house, at least during my visit, was strewn with musical instruments, still out from a recent jam session, he told me.

Before he worked in finance, Boich was a professional musician who temporarily dropped out of college and embarked on a regional tour with a Colorado rock band as a guitarist and singer.

“It was the time of my life,” he recalled. “I gave it a year, but the lifestyle wasn’t for me. I returned to school, finished undergrad, and was convinced that life was going to be all downhill from there.”

Wine seems to fulfill Boich in a similar way and music continues to be a major part of his life. He even sends out playlists to his allocation list with new releases.

“Music is woven into much of what we do here. The most fun tasting experience is when one of the guests is a musician. The guitars roll out—vintage electric guitars—and I’ve got a piano and PA system,” he said, adding that his partner Gayle plays harmonica and sings, and he even has tambourines and maracas om hand for guests who may not play an instrument.

Most Boich tastings actually take place on the valley floor in the cave at Hunnicutt Wine, but a select few are lucky enough to be invited to Boich’s estate. If you’ve got a passion for music, you’ve got a good shot. Interested parties can also inquire about a tasting and lunch at Brix or The Charter Oak, or a totally custom experience. This year, Boich will debut a custom-designed 1953 airstream for tastings — or “cool hangouts,” as Boich referred to them — at his Mt. Veeder estate vineyard.

“Food and wine is — wow, what a great duo,” he said. “But food, wine, and music is the trifecta. When you add that dimension to an evening or a get-together, for me, that’s the best.”

Boich himself is a big differentiator among Napa Valley’s many premium wine brands, but he has another card to play, too. He sources from not one, but three Beckstoffer heritage vineyards for a trio of 100 percent cabernet sauvignons: Georges III, Missouri Hopper, and To Kalon.

The Boich portfolio also includes a fourth single vineyard cabernet from the Mt. Veeder estate vineyard on Wall Road, a chardonnay from the famed Ritchie Vineyard in the Russian River, and a cabernet under a secondary label launched in 2017 called NVS. While it technically stands for Napa Valley Select, it cheekily sounds out “envious.”

To complete his vision, Boich hired consulting winemaker Jeff Ames, a former protege of Thomas Brown whose client list now includes Tor and Anthem. Boich produces roughly 2,000 cases available through his allocation list but has recently decided to open up his cellar to anyone who wants to purchase Boich wines. For the first time in the brand’s history, there is no waiting list, and this offer will continue on as long as the pandemic prevents people from visiting Napa in person.

“Wine is one of those ventures where you have an unlimited upside when it comes to quality. You can really thrive if that’s your intention. It’s a blank slate, which is one of the more fulfilling bits of it,” said Boich. “Making wine is great and super fun, but I’m not that special. To make wine that can stand on a world stage, that is special.”

The wine business is already a financial gamble, but on top of that fires continue to be a major threat to his estate — the 2017 fire destroyed all of his landscaping and miraculously left the structures untouched, while the recent Glass Fire came within a mile — yet Boich simply shrugged when asked if it’s a concern of his, stating it’s just a fact of living in his personal paradise.

“It’s part of the landscape. If you want to be here and have this,” he said, gesturing to the view. “It’s like having the mountain lions and snakes.”

He wasn’t kidding either. During my visit, his dog Shiba brought in a headless, thankfully dead, rattlesnake to play with.

Like many vintners, Boich lost all of his 2020 vintage to smoke taint and is making the best of it by partnering with local Napa County distillery Loch & Union to turn the grapes into brandy. No matter the challenge, he seems to welcome it with open arms and a c’est la vie attitude, forever grateful for that Tra Vigne lunch and what happened next.

I’m not a huge fate guy, but I don’t think any of this would have happened if it wasn’t for that day. I walked into the realtor’s office, but I wasn’t planning on it. I had no intention of buying, I was just curious,” he said. “On the spot, I said, ‘We’ll take it.’ It was 100 percent impulse, 100 percent serendipity.”